Hello, I am Nikita Vora, graduating from the University of Edinburgh

Fusing my Indian heritage and growing up in Britain I use fashion as a device to communicate social activism. I have watched Indian women silenced due to racially motivated prejudices and stigmas within my community. I want to proudly celebrate South-Asian women with a sentiment that all ethnic minorities can relate to. Diversity is always important to me.

I am a conceptual based designer who draws on my own experiences. My graduate collection was fuelled from listening to the horrific stories my mum experienced growing up as a second generation immigrant. Her first racially motivated attack was aged five and from then she had to constantly defend herself. Next she married into a family where she was verbally abused by her in-laws, which I watched growing up- the story of many South-Asian women. Watching my Mum’s pain she taught me to always speak up. I have grown to realise my brown skin and being an Indian woman is beautiful and powerful.

‘We Deserve A Seat At The Table.’ It is time for ethnic minorities to represented and heard.

My maternal grandparents immigrated by boat to the UK in the 60s with three pounds in their pocket. Print plays a vital role in my collection, I used a photo of my grandmother and her friends where a Greek statue towered over them and the other of my grandmother in a sari next to a European car as inspiration. My illustration was created to flip the script, I made the Indian women the subject and the British imagery the background noise. To celebrate our economic and cultural contribution to the Britain.

The second illustrative print was created to juxtapose the dominant patriarch within my community. Instead I wanted to portray South-Asian women as powerful, intelligent and in charge of their sexuality. This image confronts discrimination within my own community and the racial discrimination in the work place towards Indian women and ethnic minorities in Britain. Our race and gender should not limit our opportunities because ‘We Deserve A Seat At The Table.’ 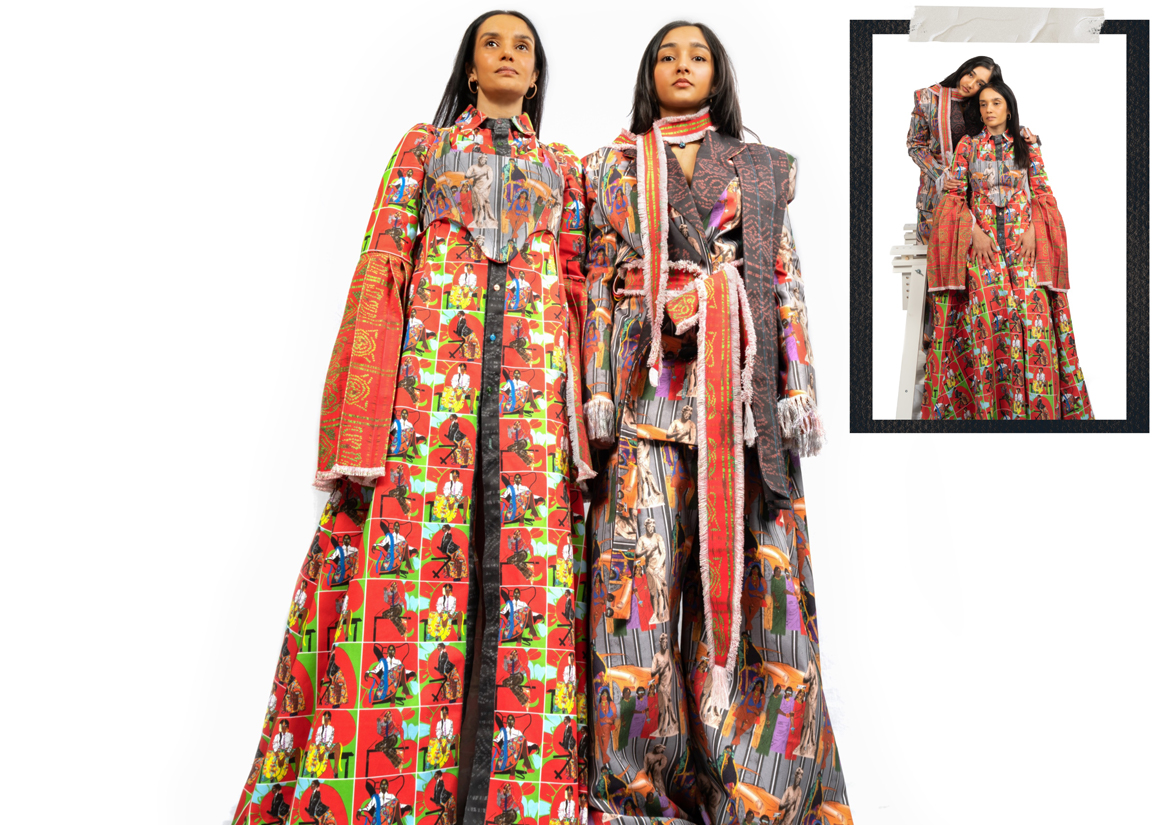 Through our eyes- editorial shoot with my mum 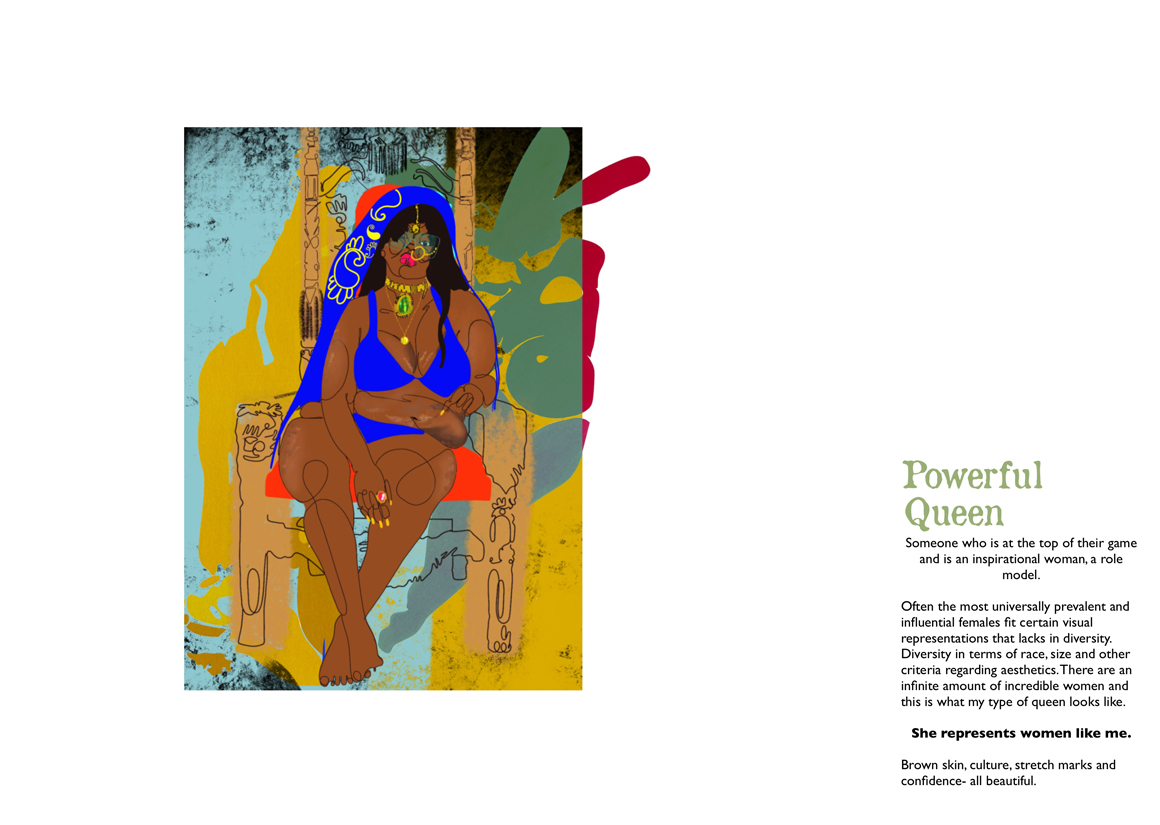 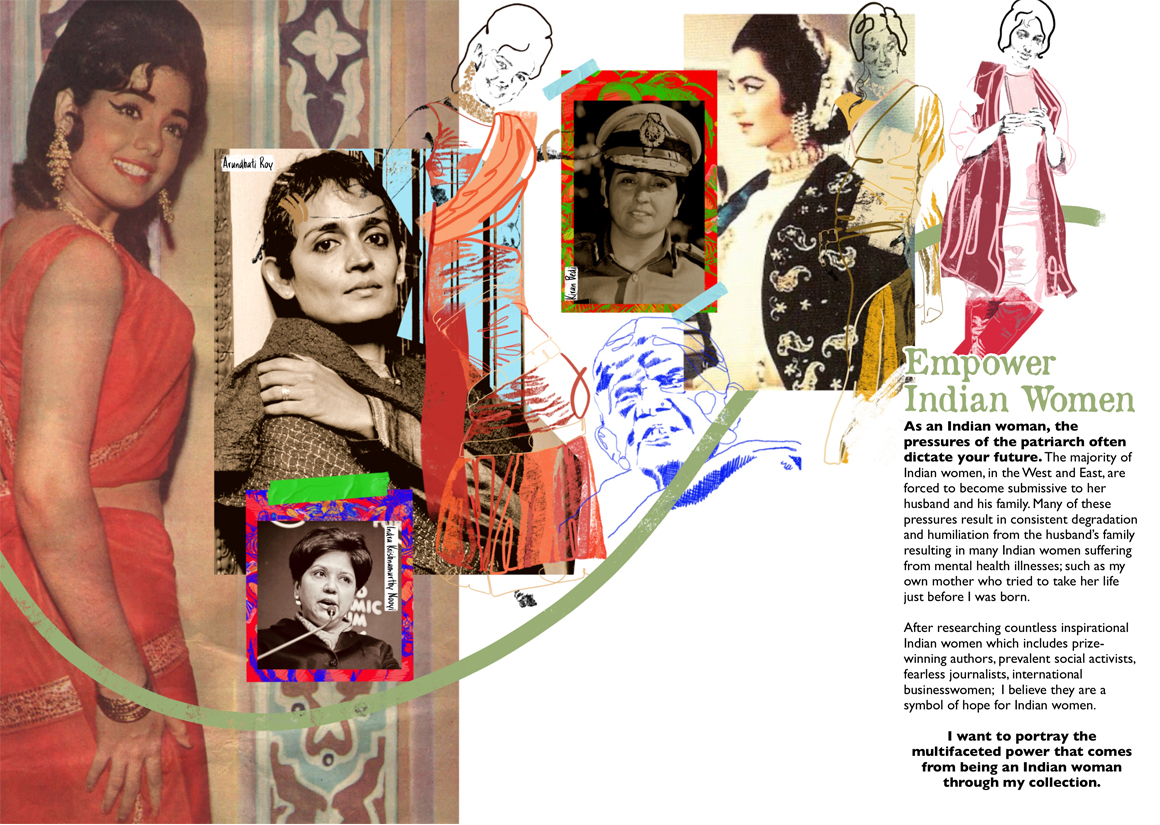 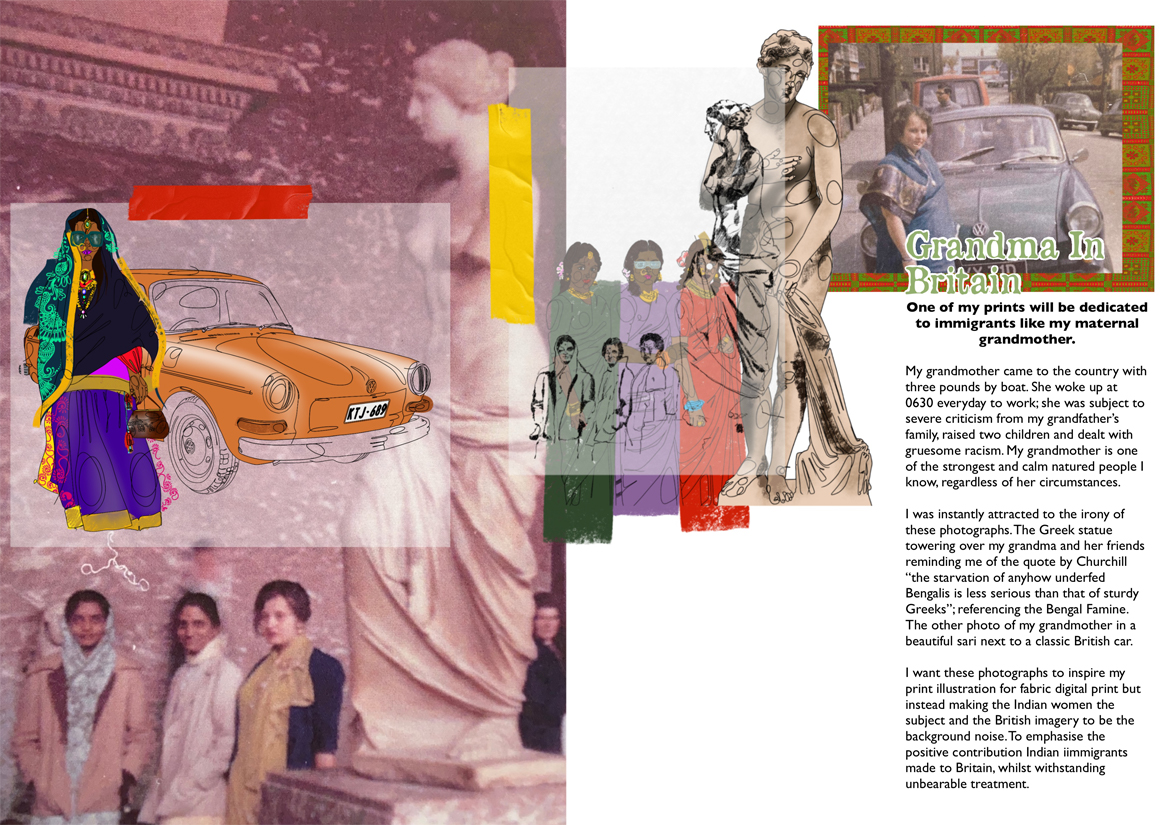 Photographs to inspire my fabric print 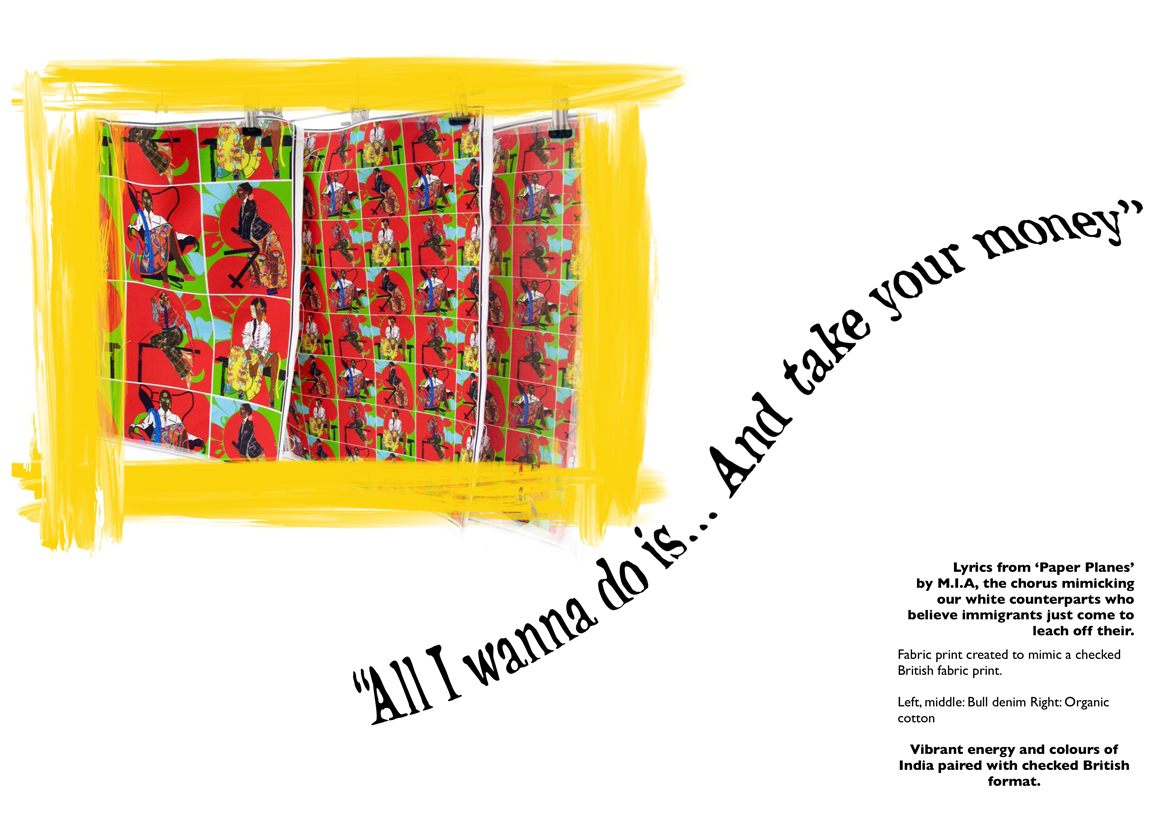 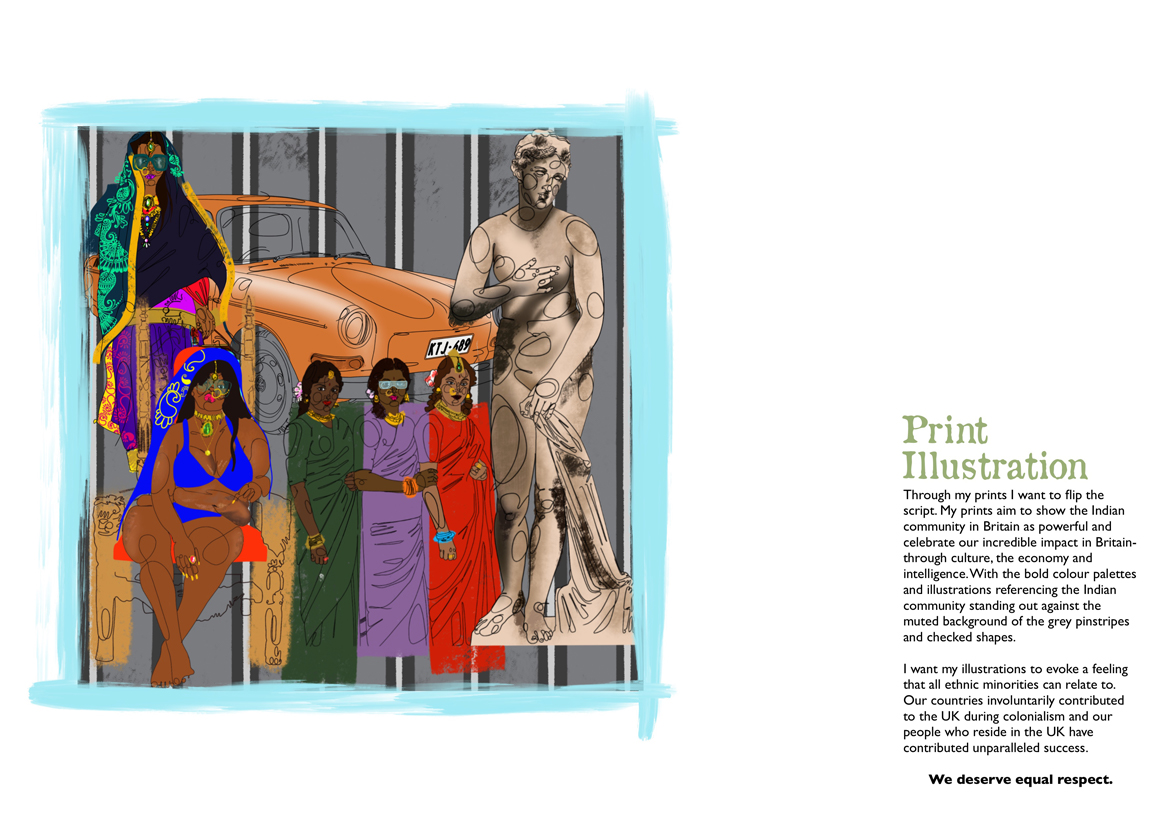 Print portraying the power of my community 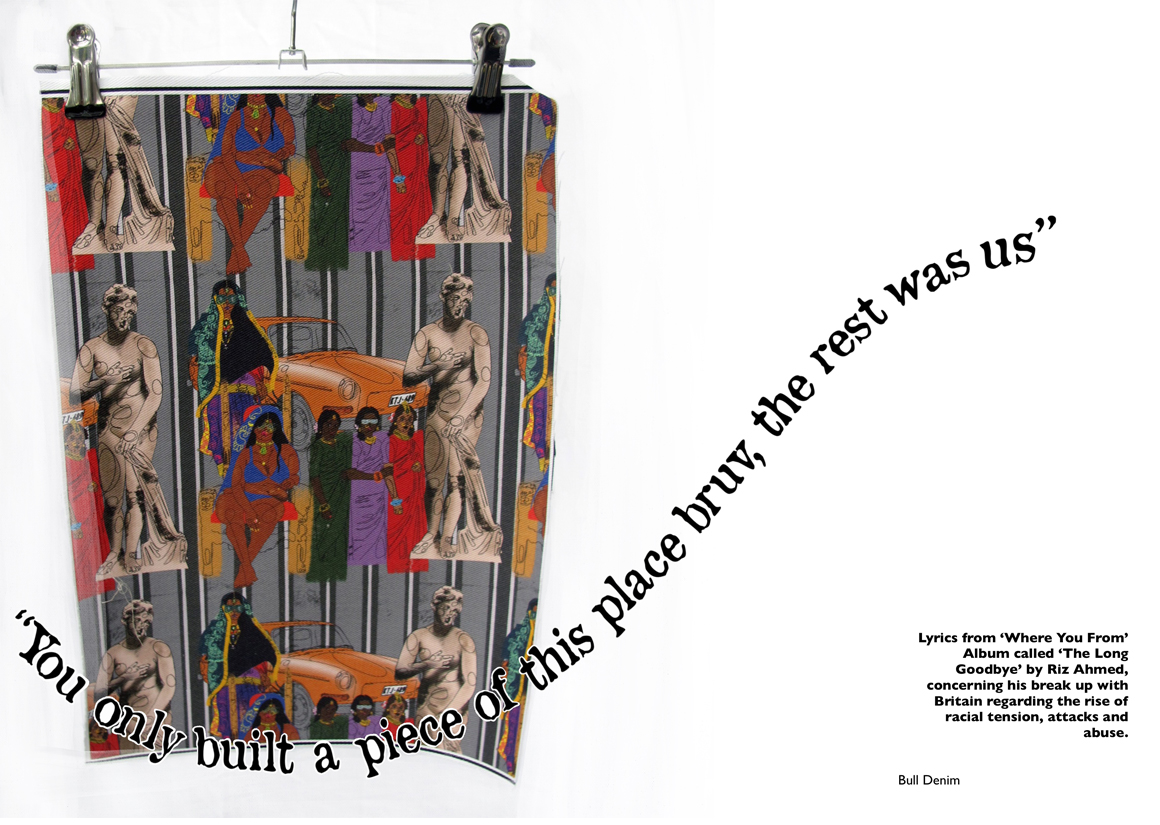 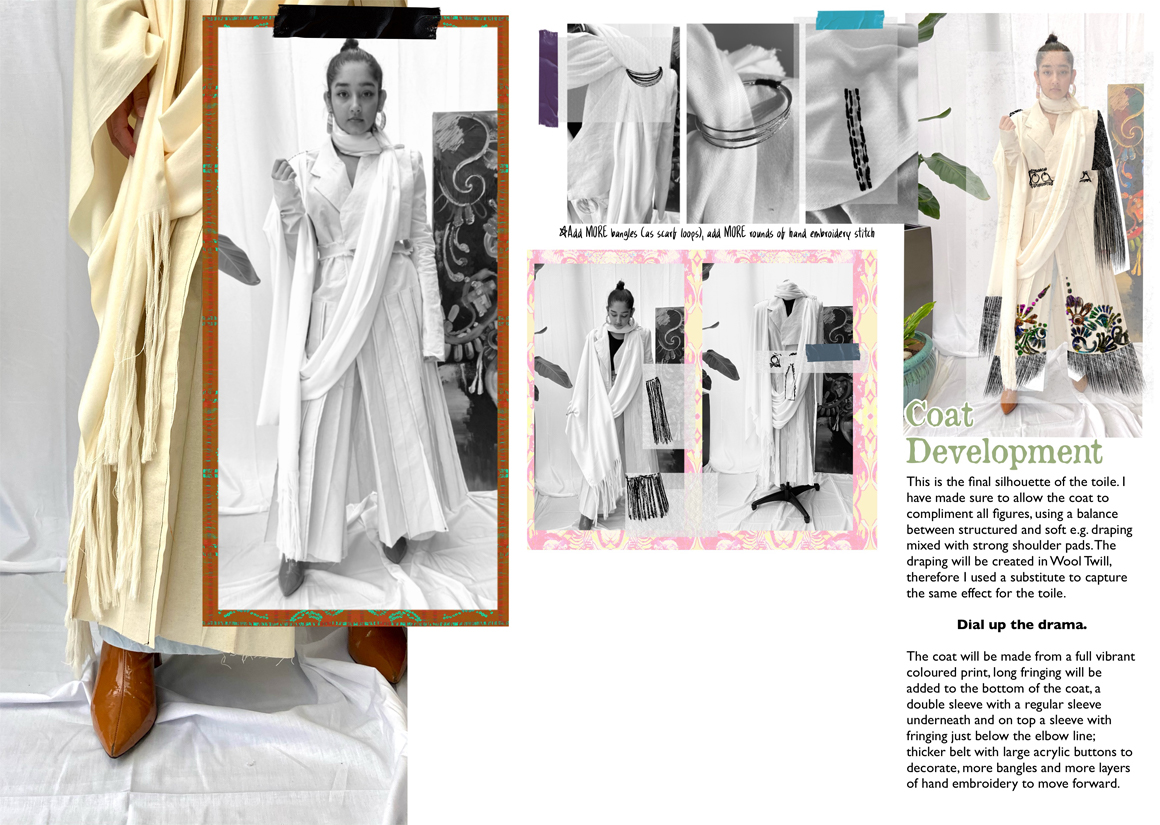 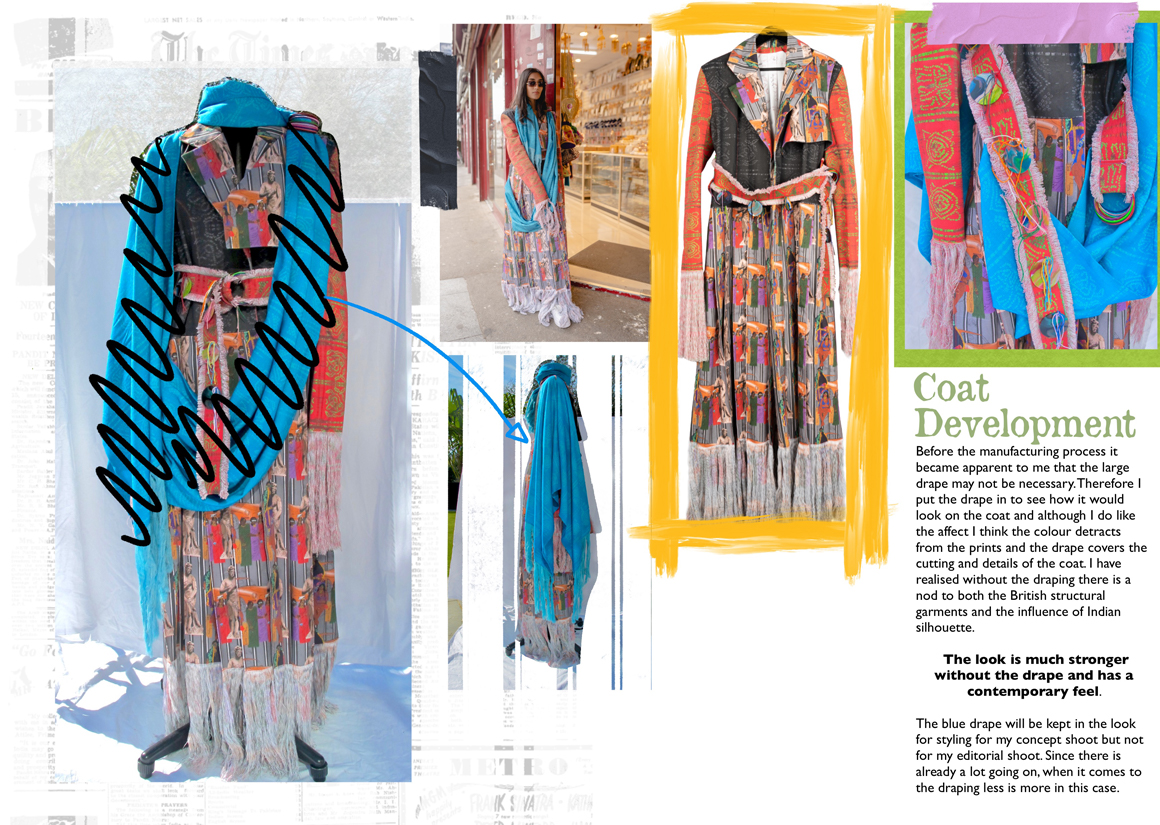 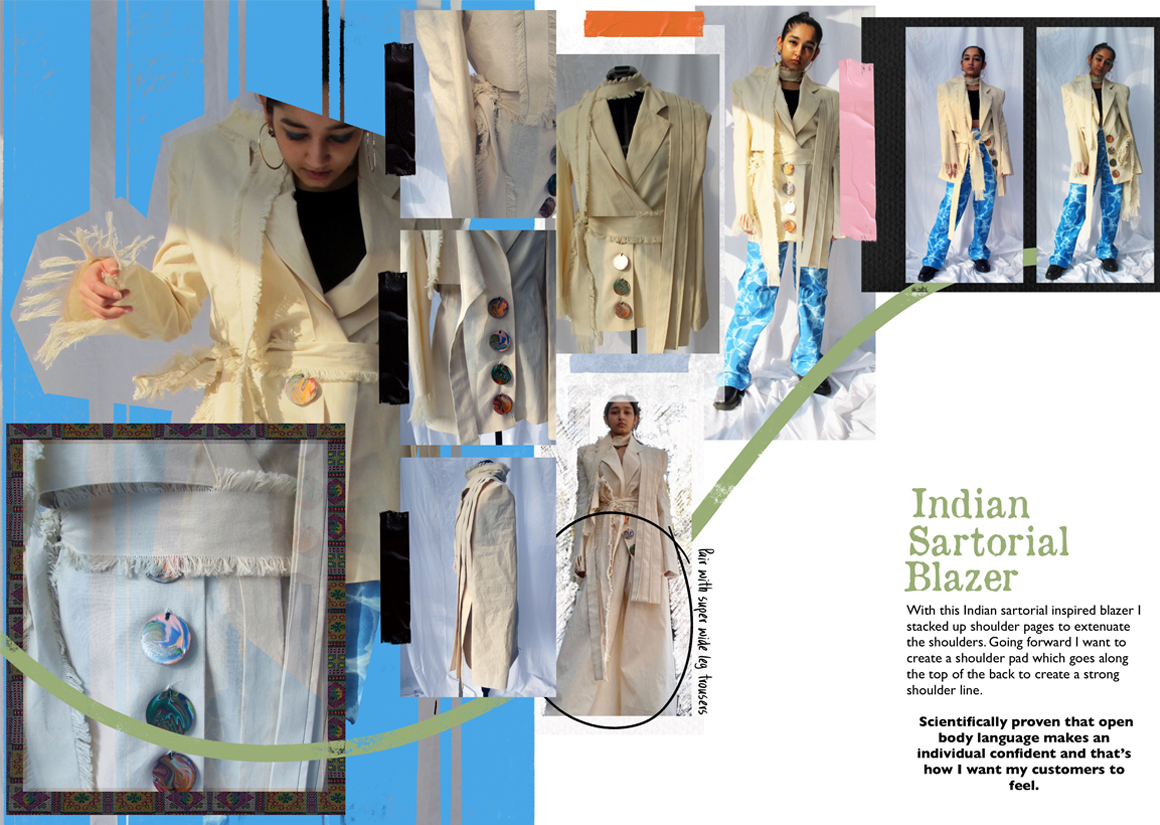 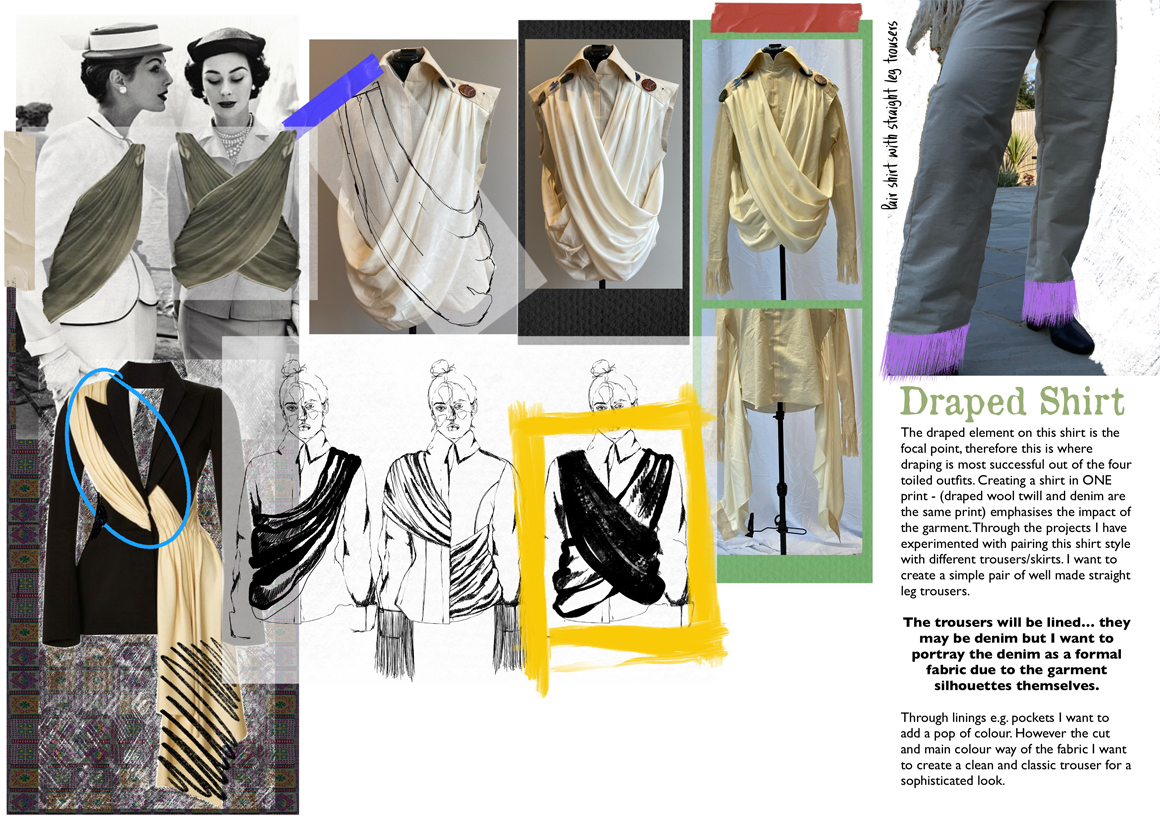 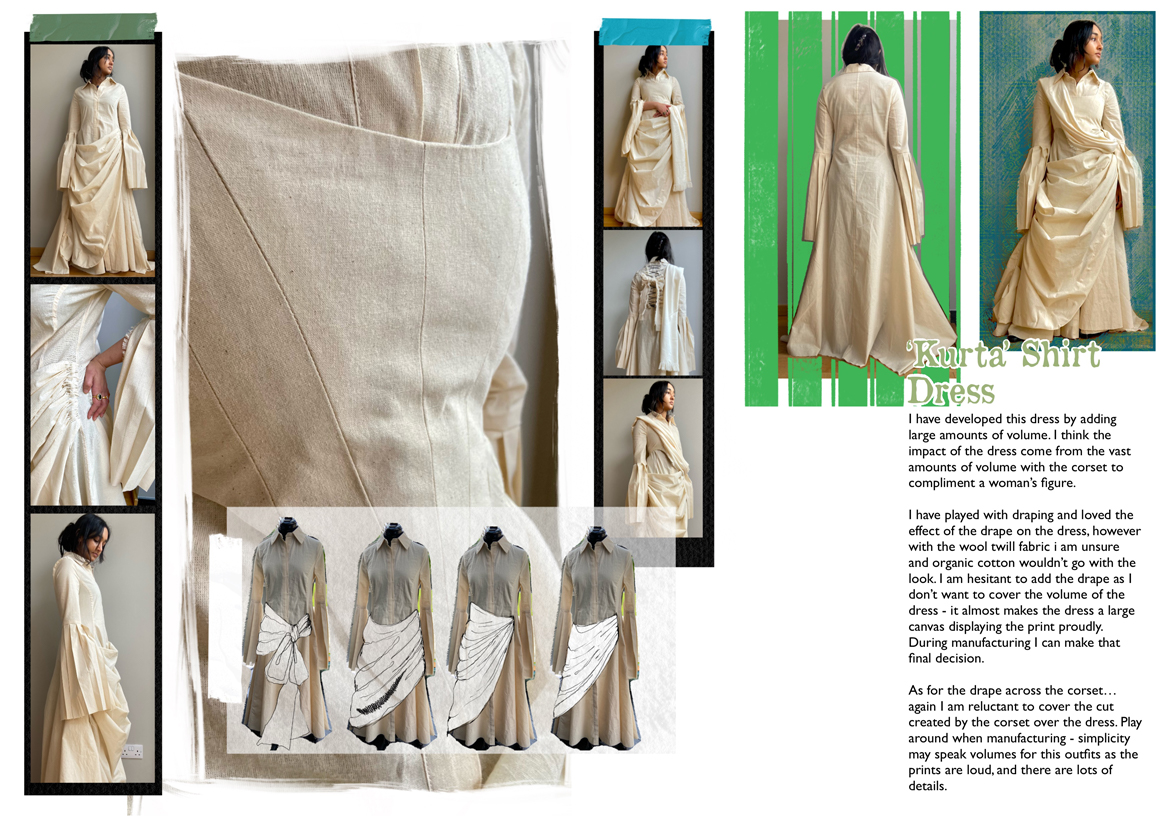 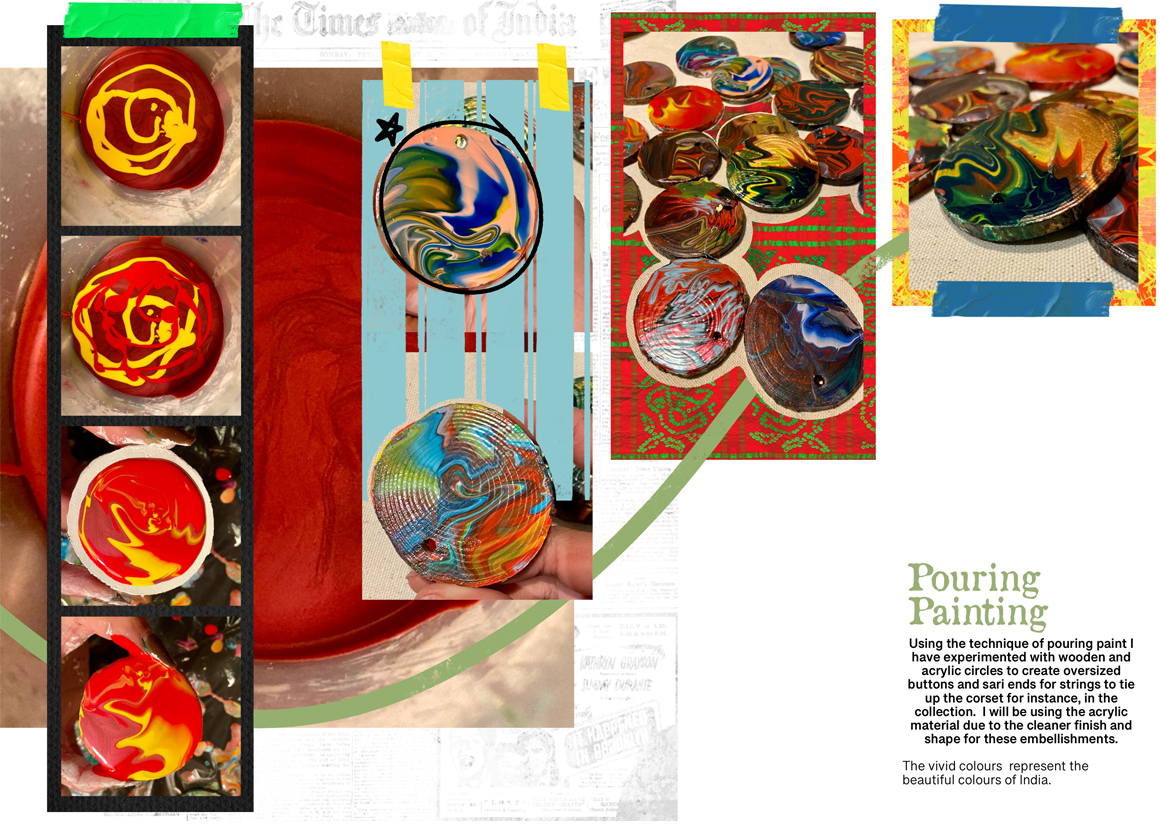 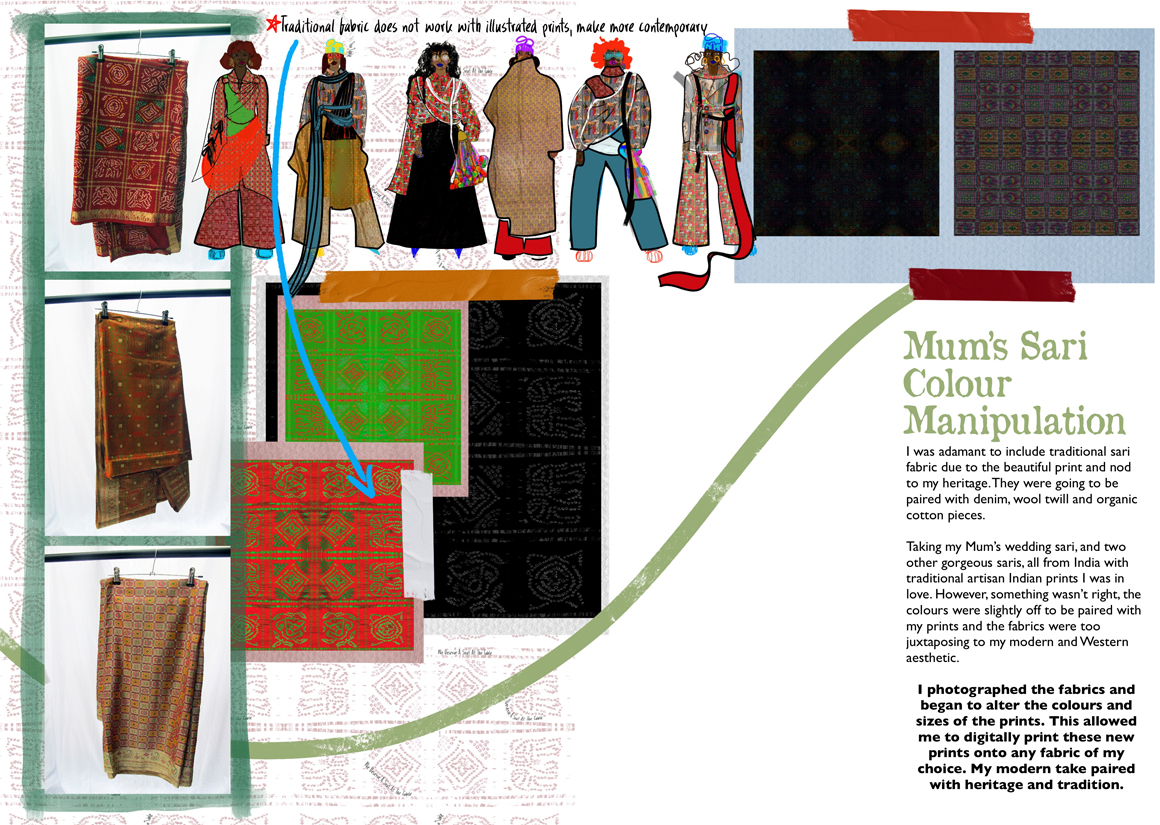 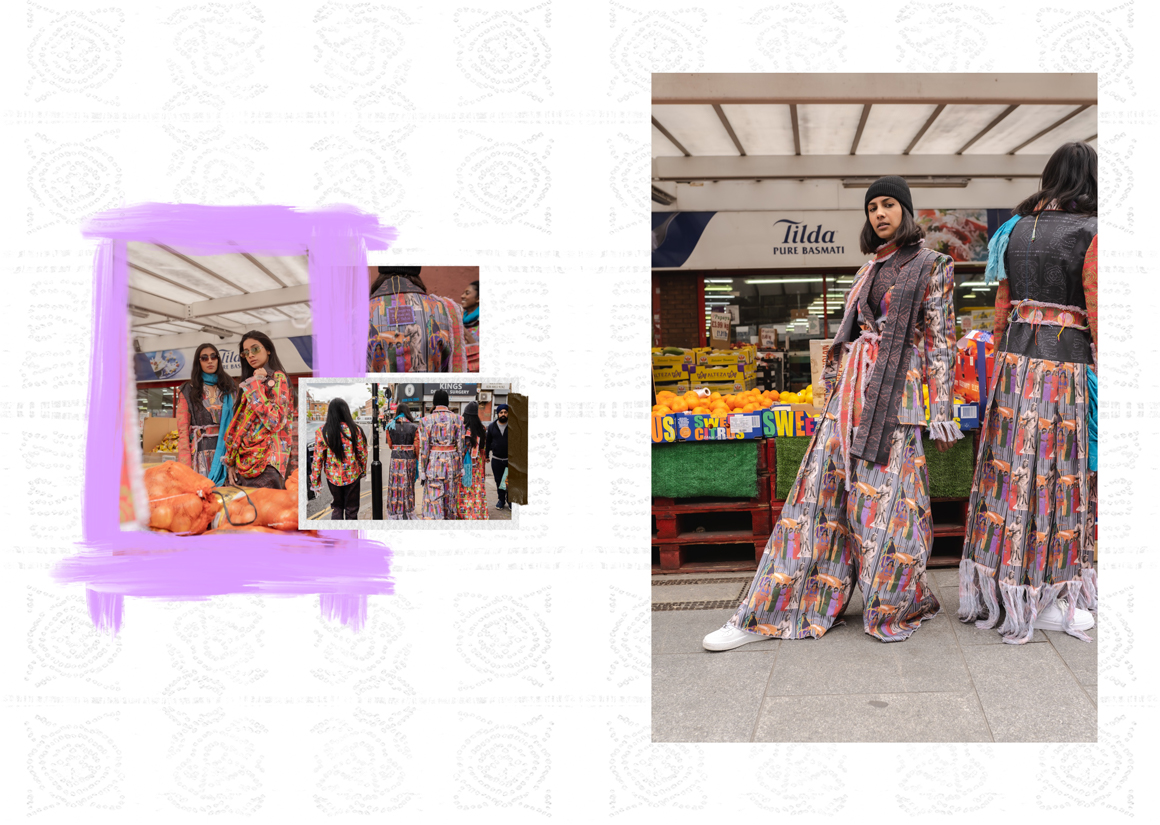 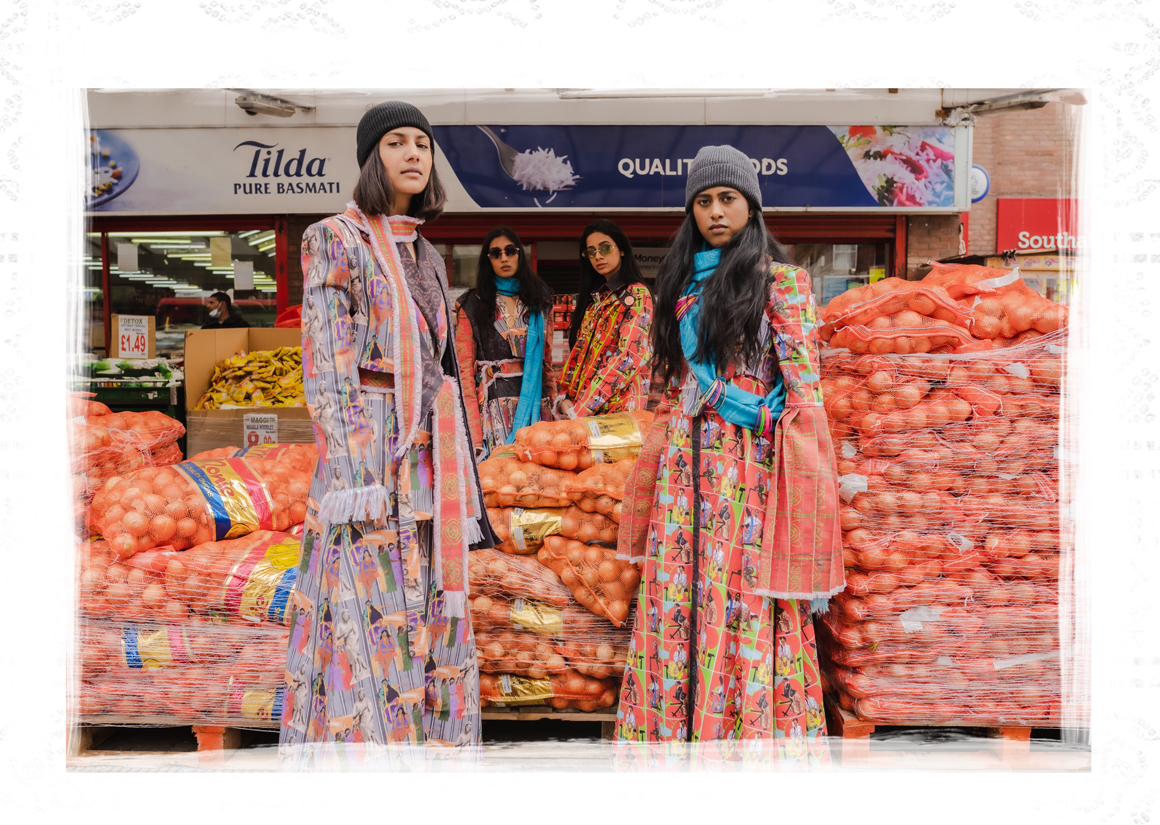 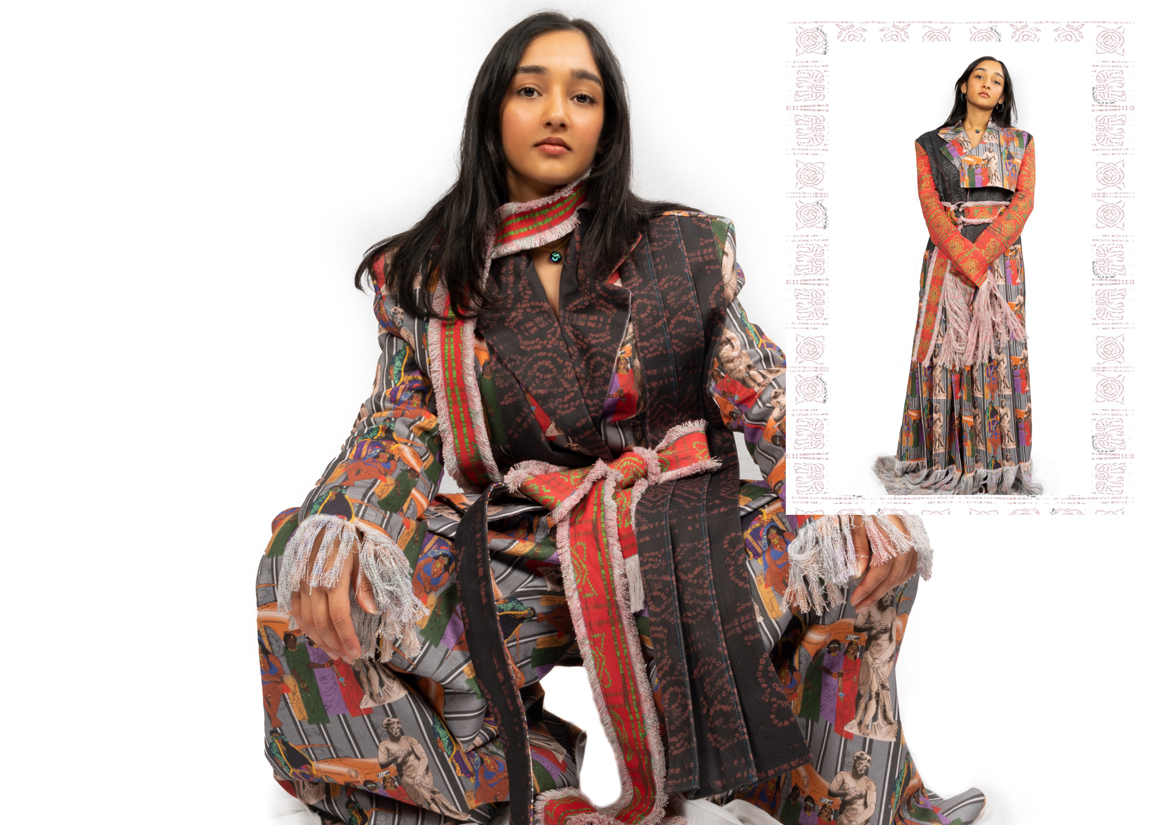 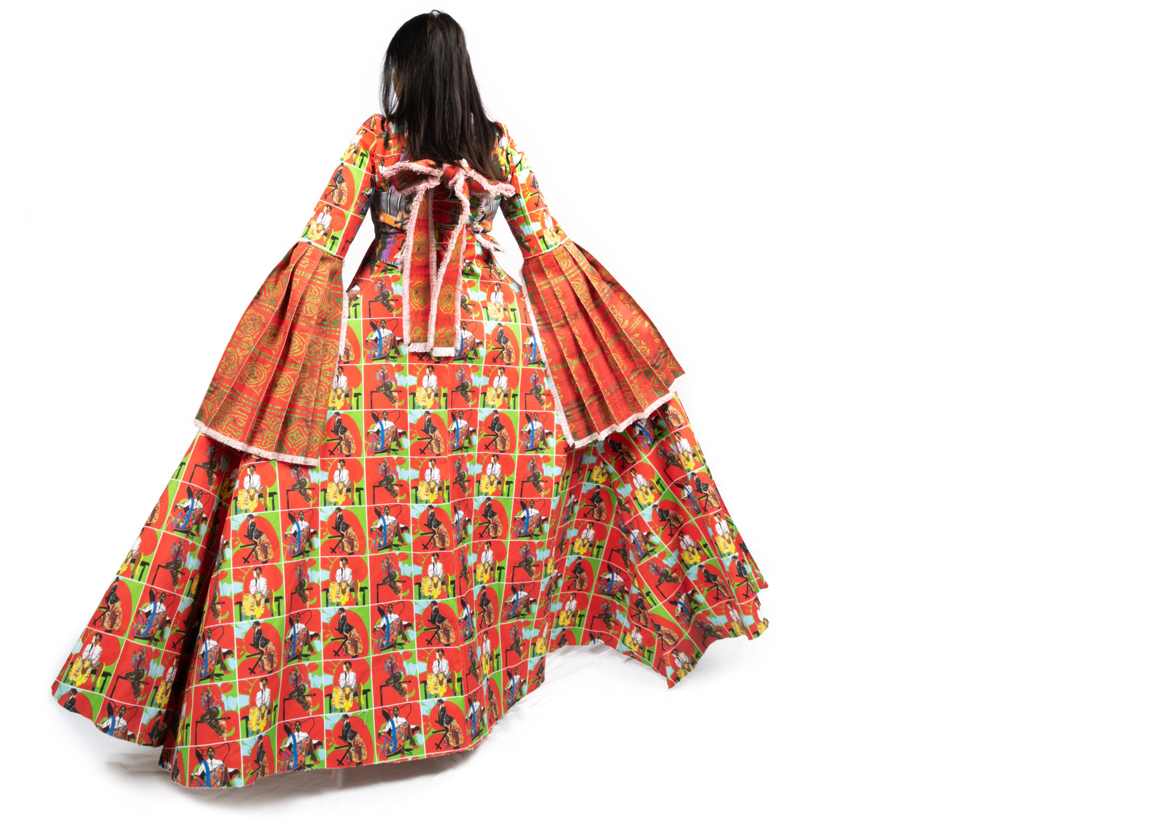 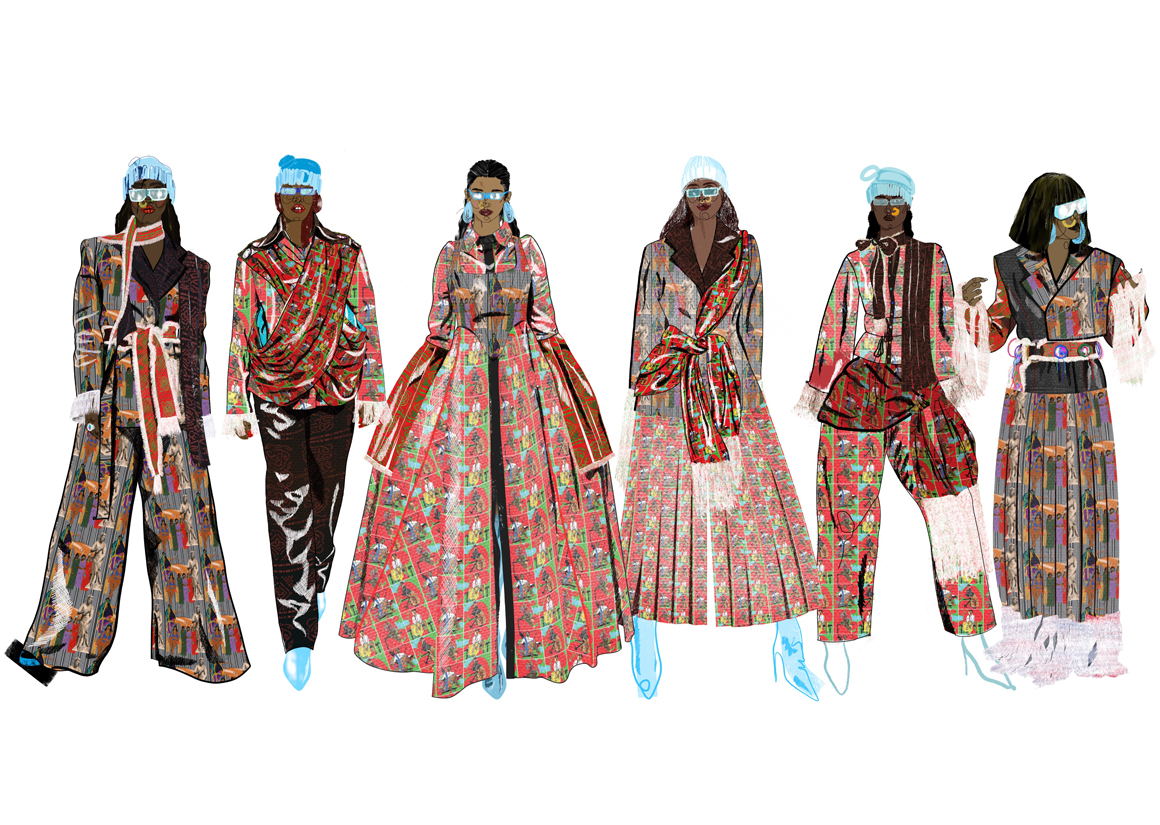 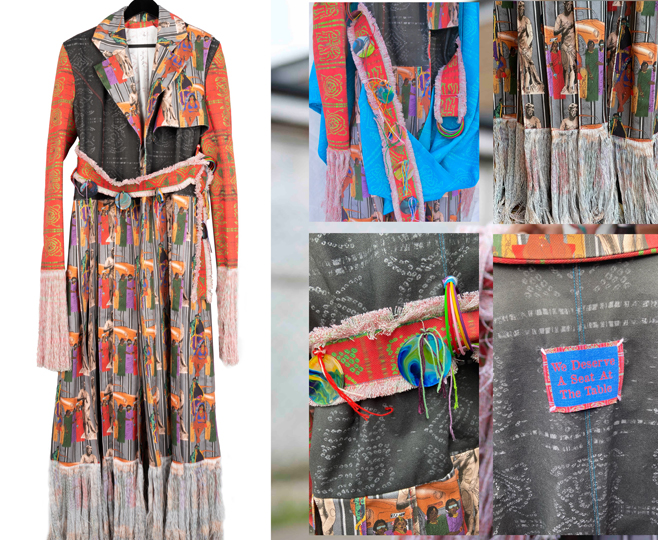 “You only built a piece of this place…” Riz Ahmed

My collection takes the slur “Go back to where you came from” and argues it with “You only built a piece of this place… the rest was us”. By creating a blend between my Indian and Western cultures through silhouette and garment construction; I aim to portray the benefits of a multi- cultural society in the UK as a British Indian. British heritage tailoring inspired the shells of my garments to embody the hostile conservative beliefs towards ethnic minorities. This was combined with Indian traditional and contemporary sartorial style to lend itself towards the intricate cutting and softer feminine silhouettes. The marriage between both silhouettes and details resulted in garments such as my ‘Indian Sartorial Denim Suit’. Indian artisans and Savile Row tailors are both known for intricate hand details which I wanted to translate into my collection through machine topstitching, hand embroidery stitching, hand painted abstract buttons and fraying as a key feature.

“Miss India always speaks with her chest, got respect from her people ‘cause she leads them the best, hmm, real life queen in the flesh” Little Simz, ‘Woman’