One of my dearest memories from my childhood was sitting down on a Saturday morning and watch brat pack movies with my dad. His passion towards rock music and the 80´s decade paraphernalia represent a huge influence and a constant source of inspiration along my costume and fashion design creative process.

I spent the summer of 2019 working with a friend in the creation of the costume design for his short film `Perdido´. The sci-fi film tells the story of a lost astronaut whose spaceship lands in a lone post apocalyptic Earth. After this experience, I really wanted to work in a bigger costume design project. To me, The Lost Boys is one of the greatest brat pack films for being a fun blend between the Peter Pan story, teenage vampires and the 80´s rock aesthetic.

I WANTED TO CREATE A NEW GENERATION OF `THE LOST BOYS´ AND TELL THE STORY AGAIN FROM MY PERSPECTIVE.

Despite Mexican film directors are very successful in Mexico, costume design was not a very popular scope for the Mexican film industry audience. I really wanted to show the art and complexity behind the creation of a character through a story that represented something to me. Growing up, The Lost Boys became a reminder that `the good is above the evil´ and I believe that it is a relevant message that is always worth to take inspiration from.

Vampire classics are well known for portraying either an ancestral and dark lifestyle (Interview With The Vampire, Nosferatu), or a modern romantic version (Twilight Saga, Vampire Diaries). I wanted to create a new generation of The Lost Boys and tell the story again form my perspective through a universe around predictions of a futurist vampiric lifestyle, recovering the rock influence. That was the reason Futurism and Glam Rock became the guidelines for the new aesthetic. 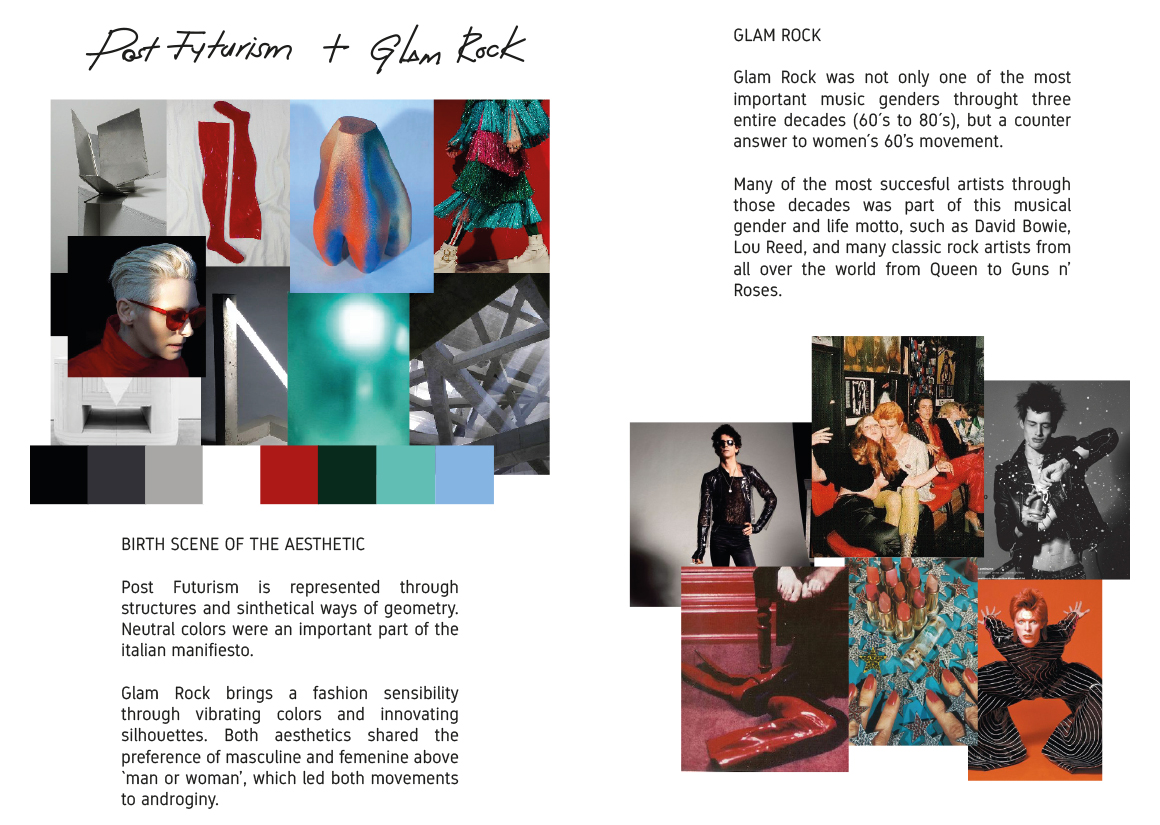 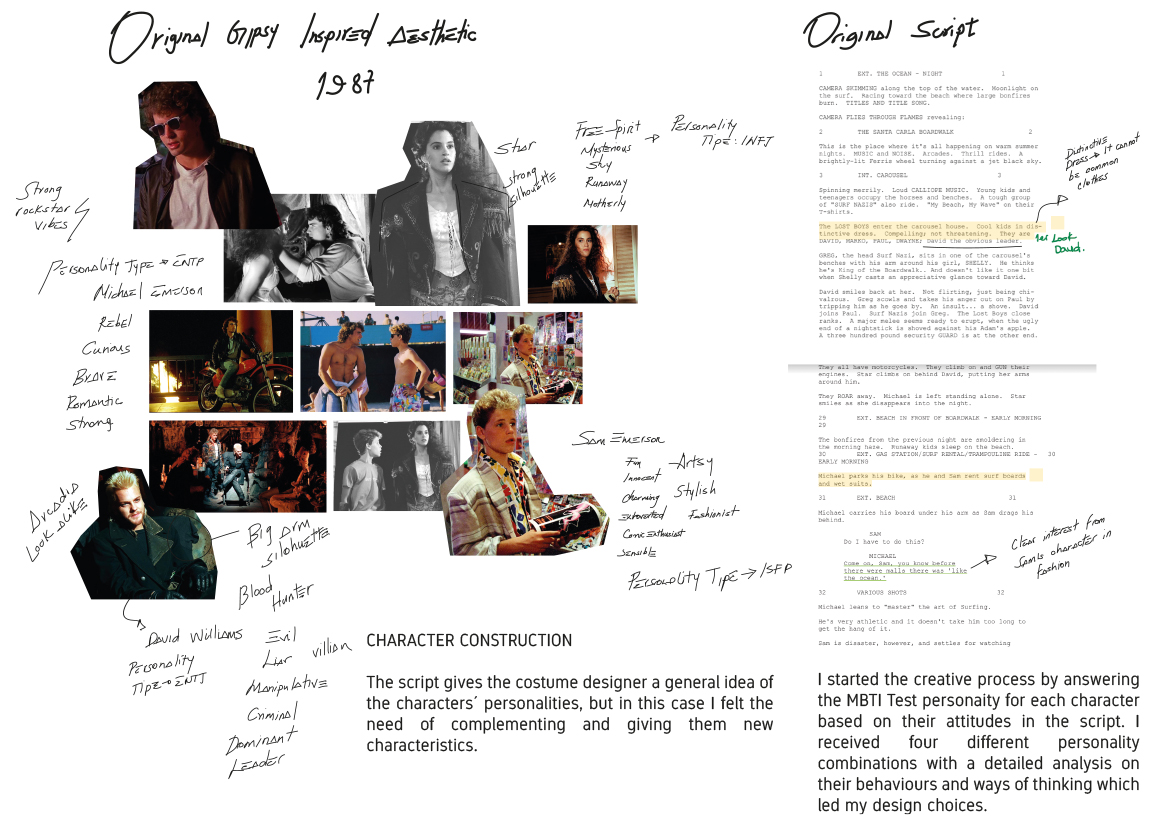 Personality development based on script and MBTI. 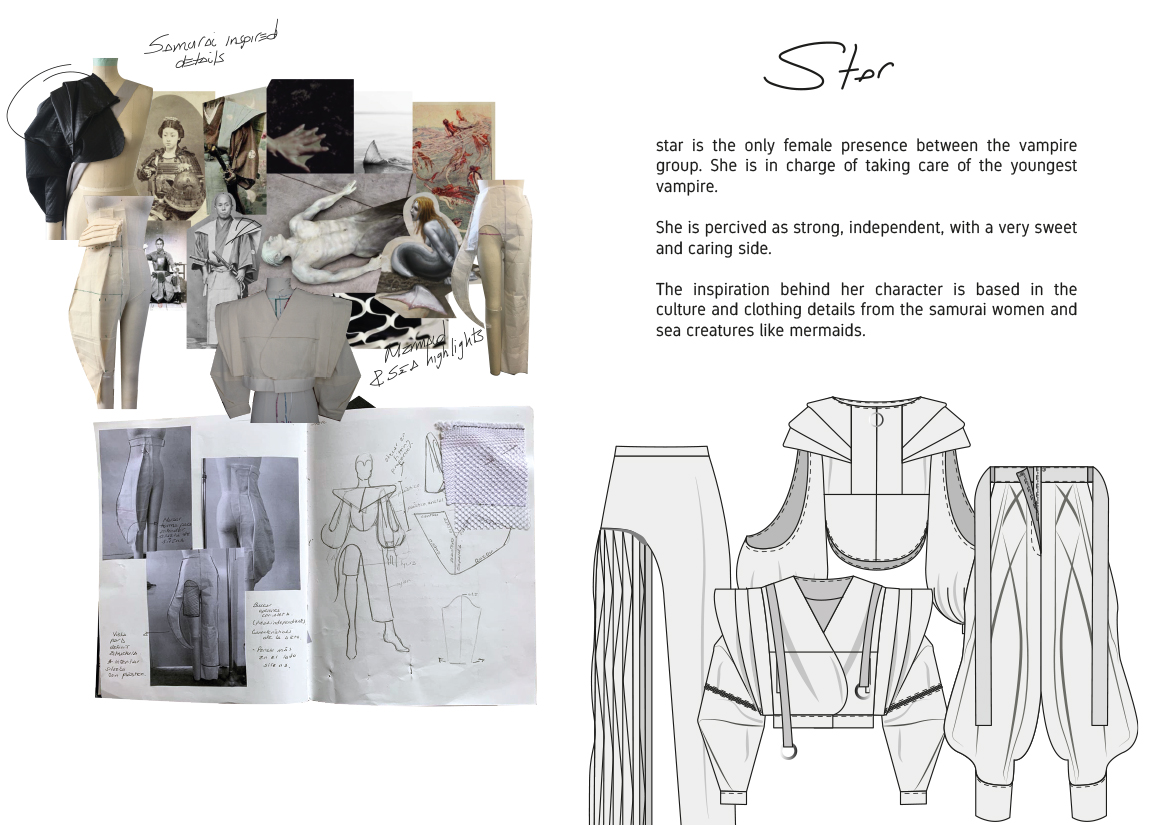 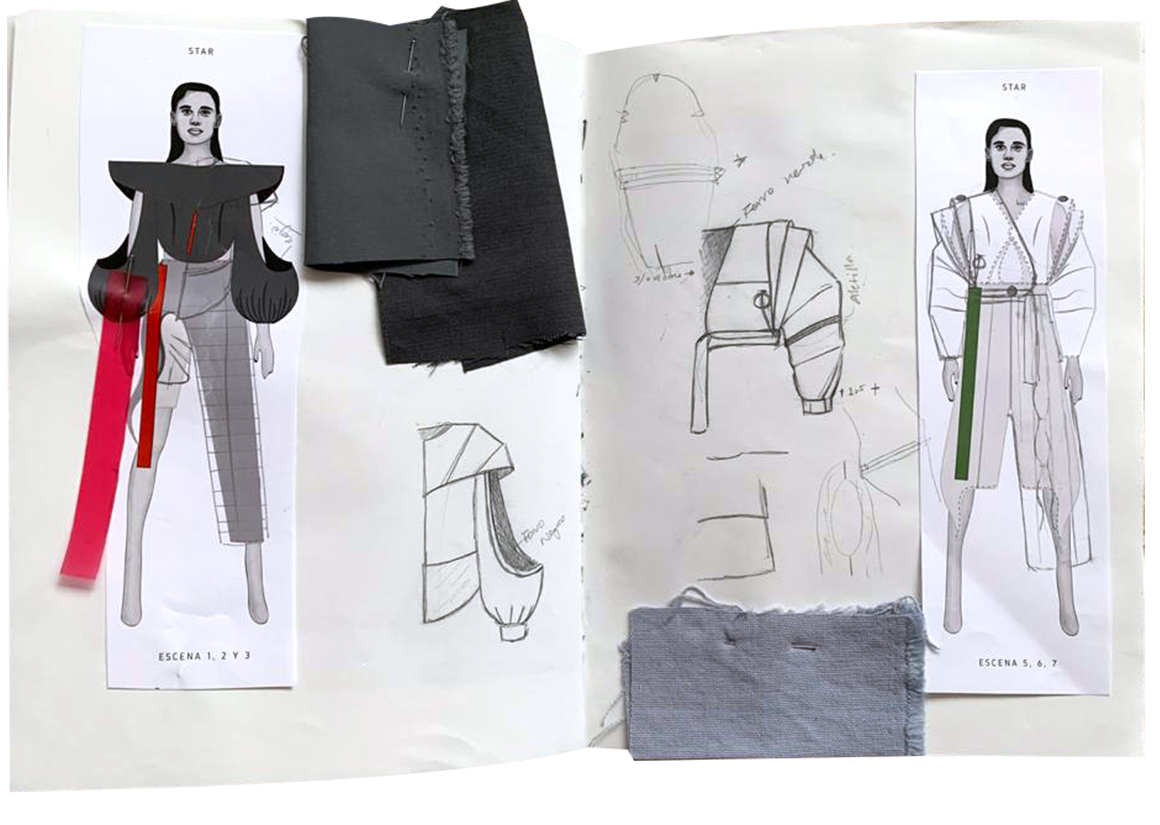 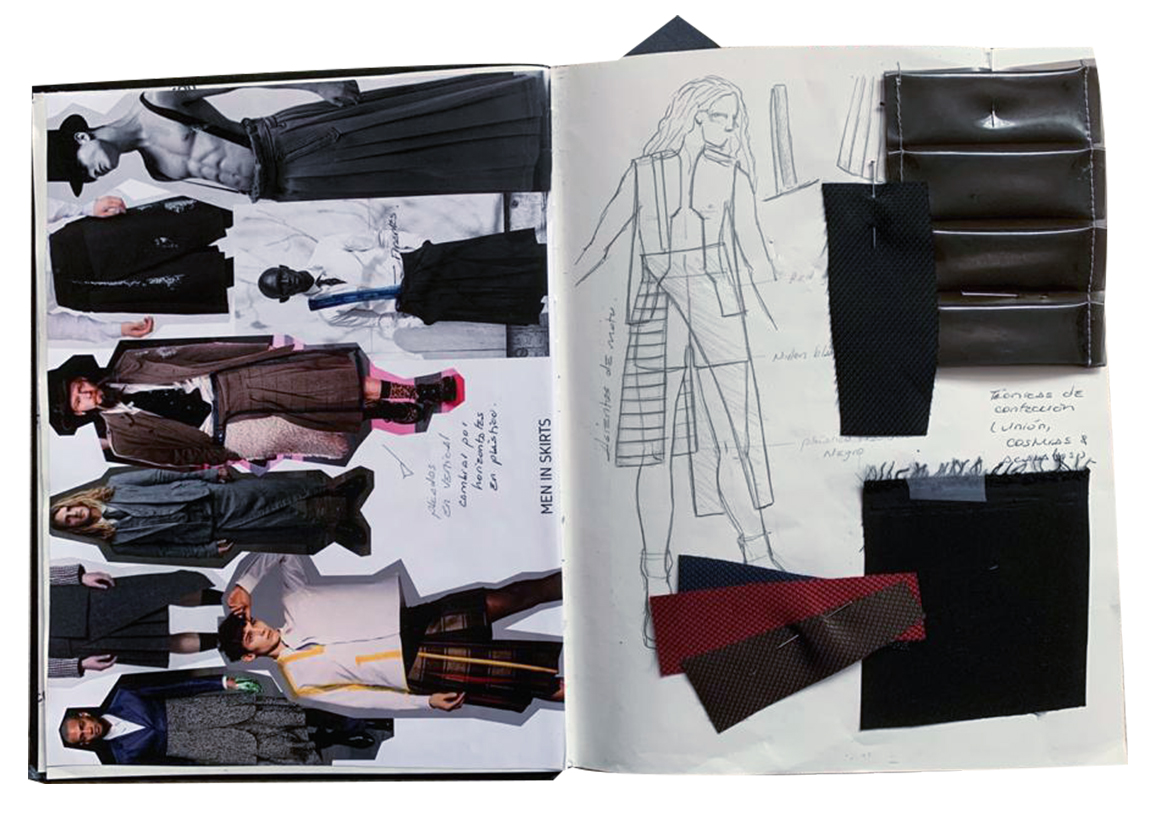 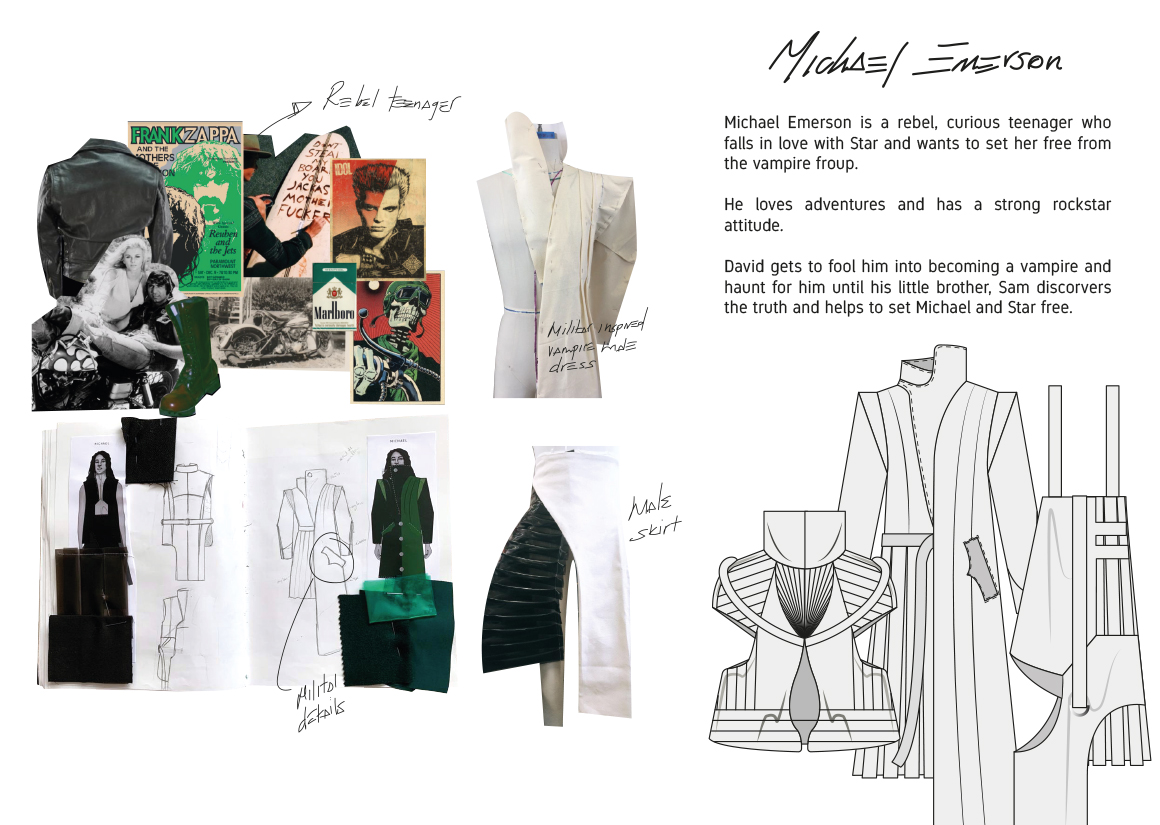 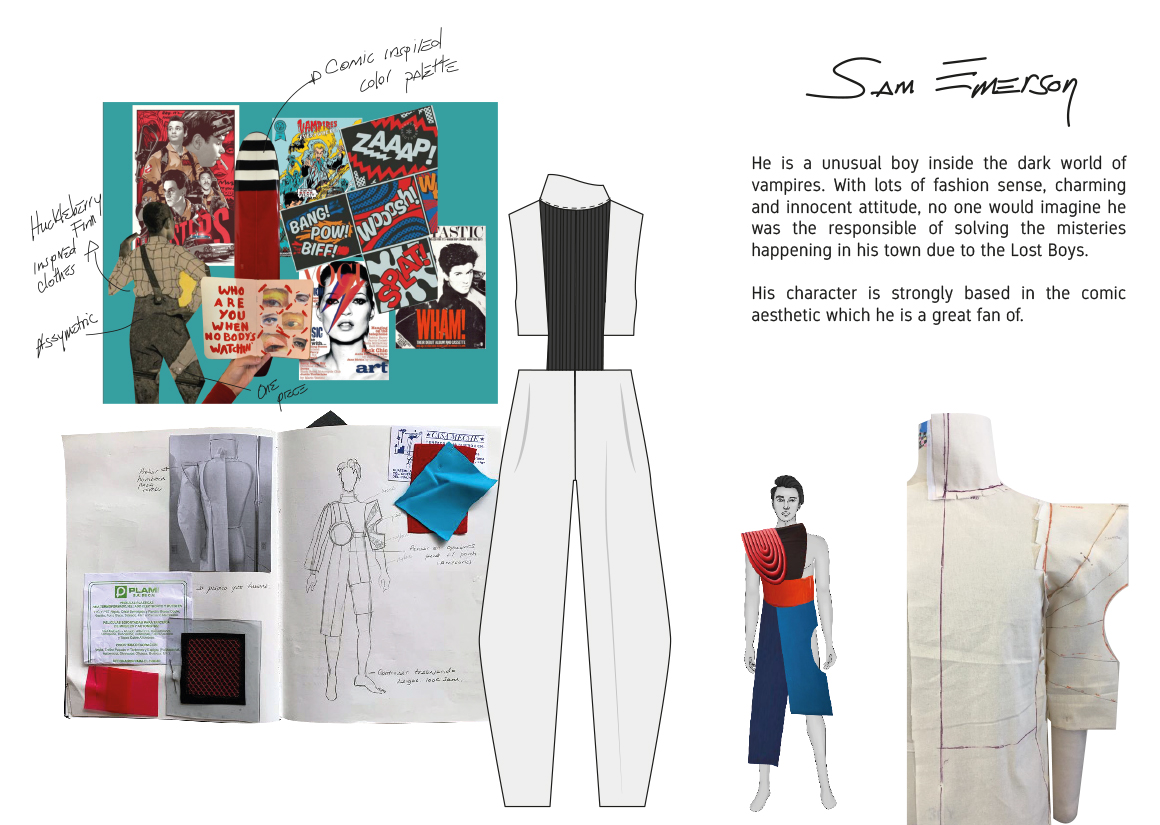 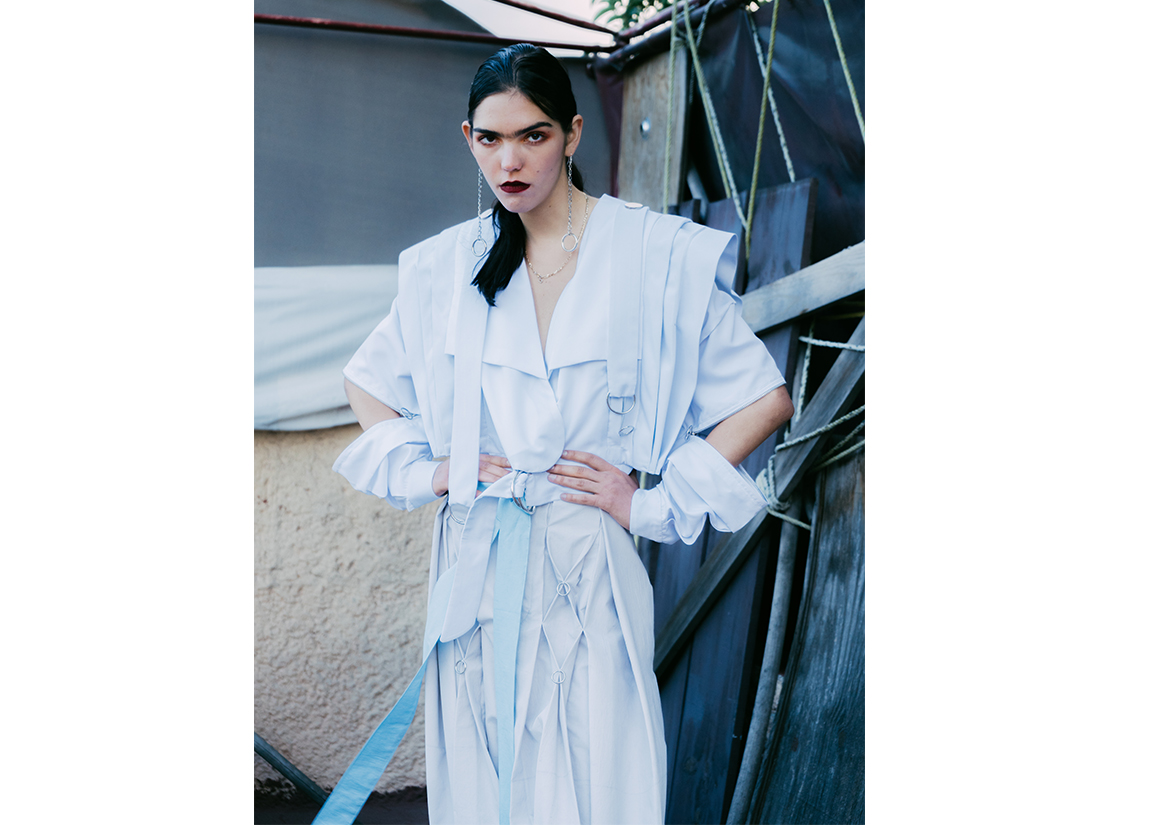 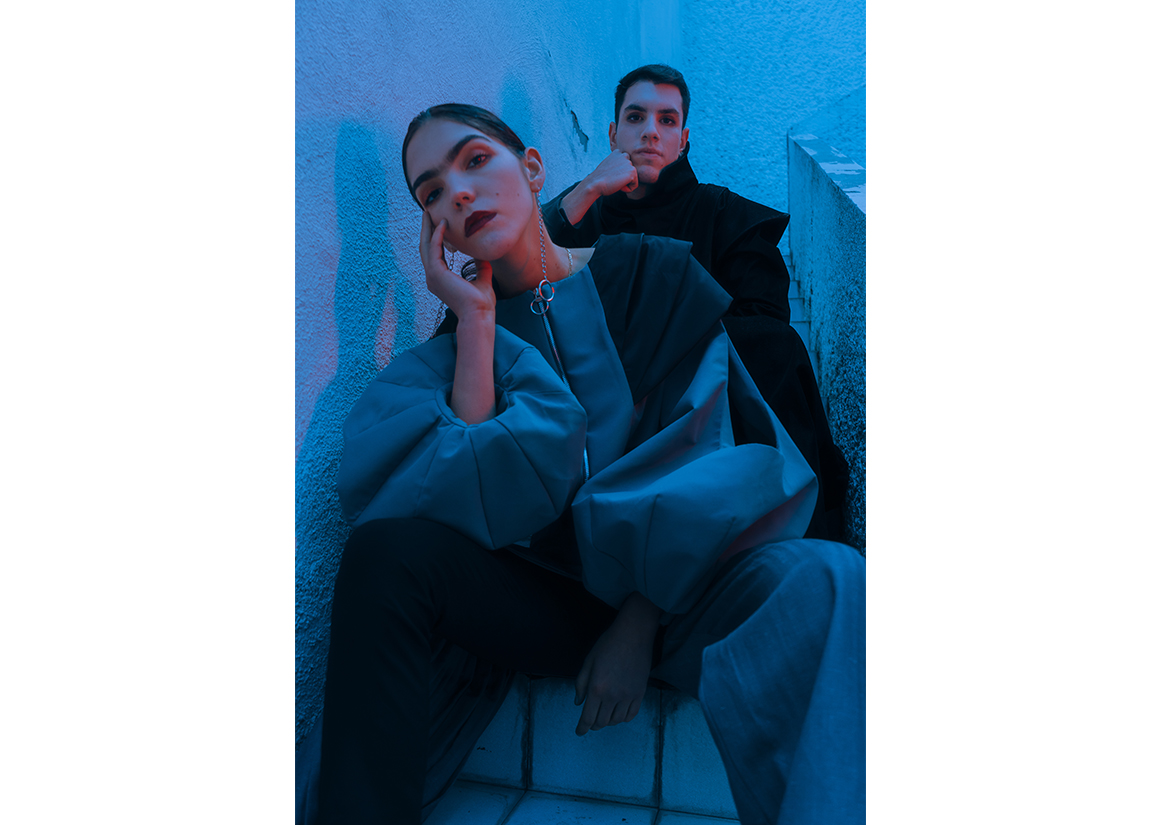 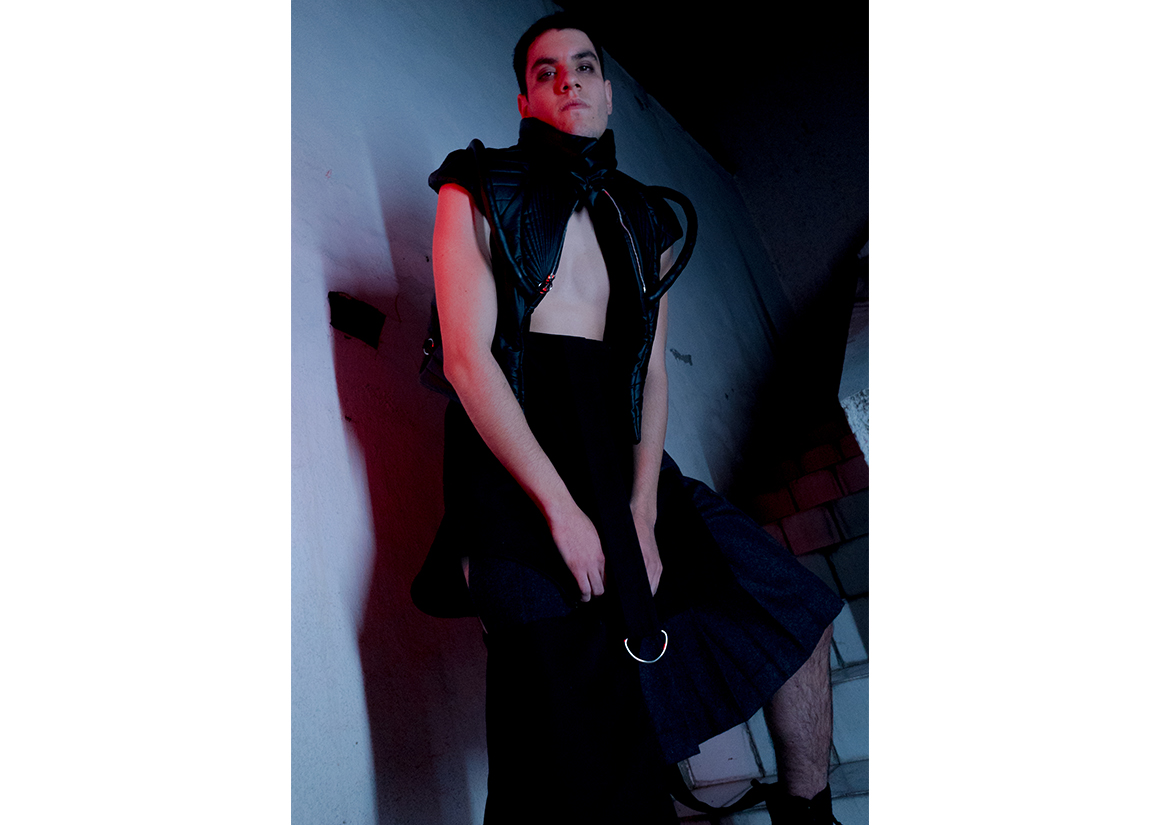 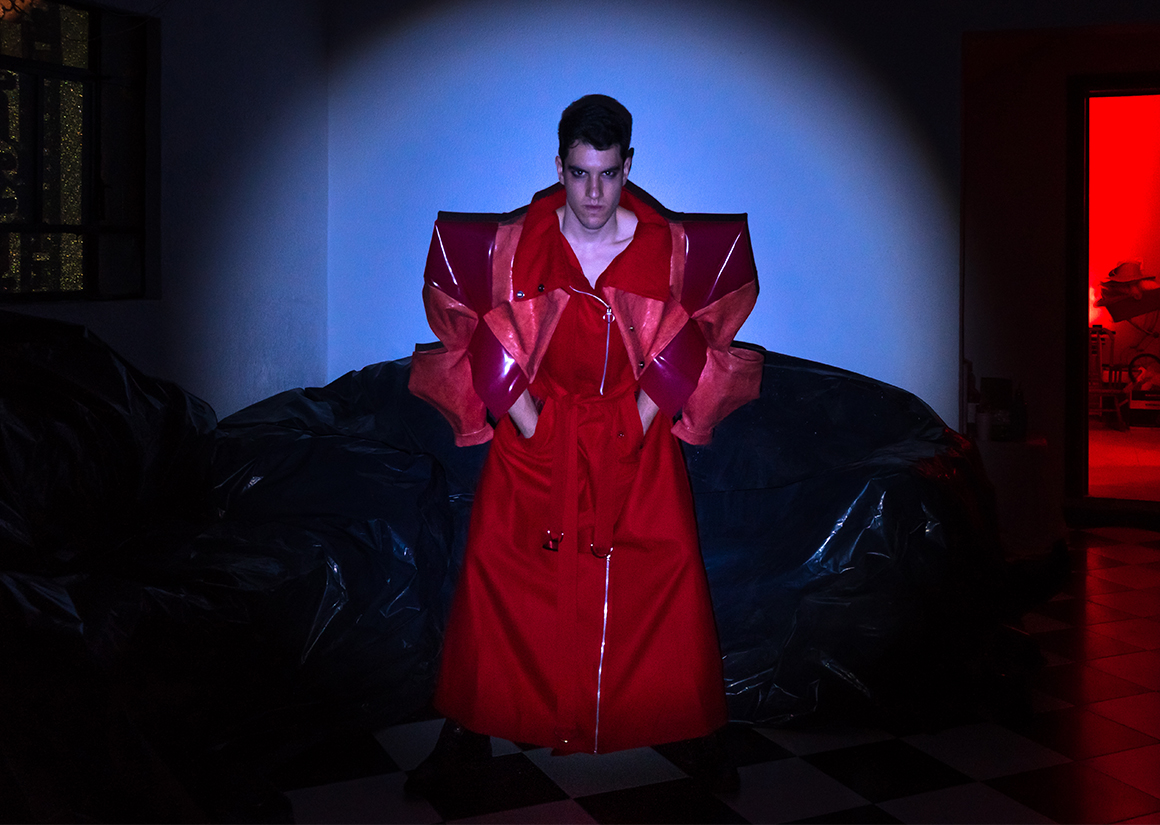 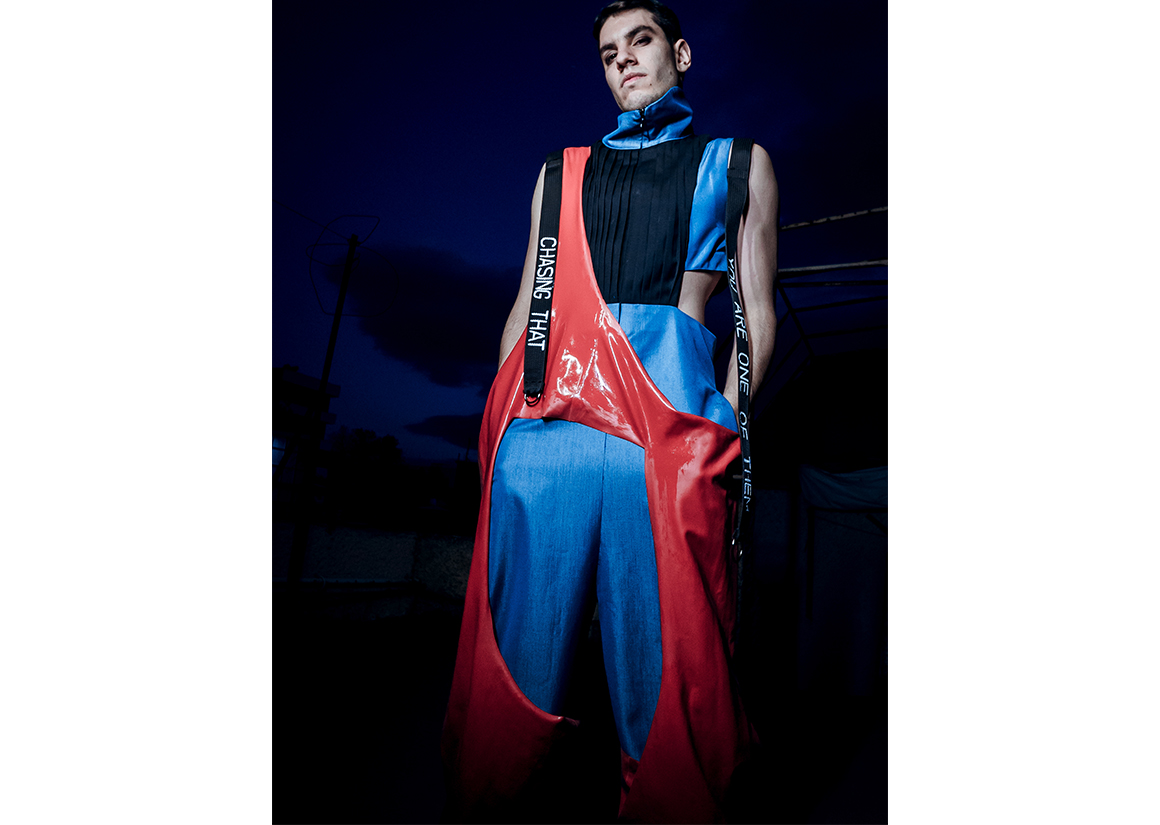 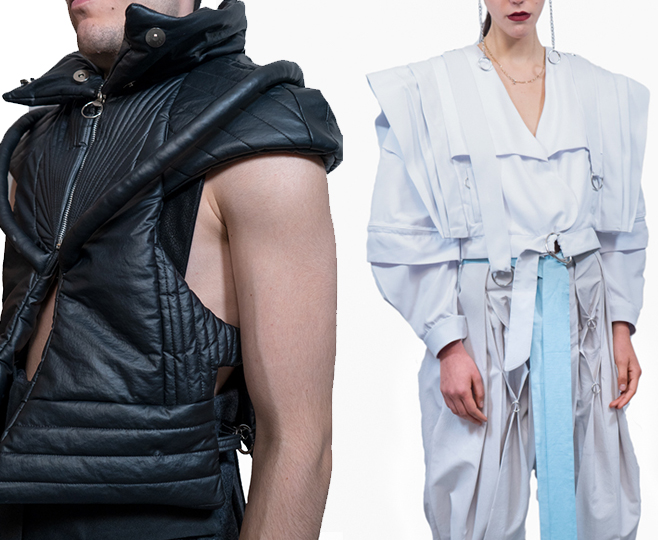 My favorite part of costume design was getting to leave hidden messages within the details of the clothes in each character. Through textile interventions or accessories, it is possible to suggest the audience what are the actual intentions, relationships or even alliances of a character by linking similar details between their clothes such as placing the same graphic or using the same tackle.

The Lost Boys became a reminder that `the good is above the evil´ and I believe that it is a relevant message that is always worth to take inspiration of.